One and One-half Milk Carton Crates

One and one-half milk carton crates. That’s all the space I need to pack my portable station and bring it with me in our car to every winter. Well, to be fair, I’m not counting the extra bag I need to carry the antenna, but that’s not very big. And, I can cram that into our car wherever there’s extra room.

My wife and I moved “up north” to our lake home on a little more than ten years ago. It’s a beautiful place, but we’re not crazy. The winters are severe. A few years ago, the thermometer hit -40F, and I took a picture. I took another picture when it hit -47F. That’s cold.

sits in the middle of harbor. It’s not really an island any more, because they built a land bridge to the mainland many years ago. But it was an island, it feels like an island, and everyone still calls it an island.

The temperature is 65 degrees. People who have lived on for a long time, or in for that matter, get used to 65 degrees. A friend who moved here from many years ago told me that, and I believe it. If it gets much above 70, they think it’s too hot, and they think it’s cold when it gets into the 50s. It’s a great place and a very nice place to be during the winter. I am pleased to say is the winter QTH for KØXB/6.

I know this doesn’t have anything to do with ham radio, but you should also know is where is located. ( used to be a separate island from , but they filled that in too.) It’s where US Naval Aviation began, it’s where the very first US Navy aircraft carrier was based, and it is currently the headquarters for US Naval Aviation. I’ve seen as many as three carriers in port at one time.

When the carriers head out to sea and when they return, the air wing flies either to the ship or back home. It’s pretty impressive to hear and see an entire air wing of F/A-18s taking off or landing. 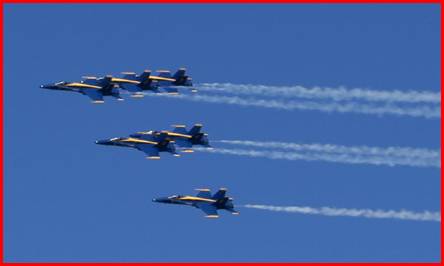 February, 2011 was the 100th anniversary of Naval Aviation. For that celebration, hosted a large air show. The Blue Angels kicked the show off, followed by a two and one-half hour flyby of vintage and current aircraft.

Anyway, back to ham radio.

I’ve been an avid DX-er for as long as I’ve been licensed, and that’s a long time. We rent a small house on , so I can’t install anything permanent, and I certainly can’t put up a tower and beam or anything like that. So, my challenge was how to continue my DX-ing with these restrictions. In the rest of this article, I will tell you what I have done and how well it’s worked.

The real key to any ham station is of course the antenna. I have always felt a vertical was the best DX antenna, other than a tower and beam, so I use a vertical configuration. My antenna is based on a High Sierra Sidekick, which is a motorized mobile antenna. I mount the motorized coil on a lightweight tripod in the back yard, and I throw out eight 25 ft. radials on the ground. There is only room for four of the radials to be fully extended, but I figure something is better than nothing, so I use all eight. In place of the short whip which comes with the Sidekick, I use a 12 ft. telescoping whip sold by MFJ. The screw threads match perfectly, so it’s an easy modification.

With the whip fully extended, it is resonant at 20 meters. Adjusting the motorized coil with a rocker switch in the shack allows me to easily tune down to 80 meters. And shortening some of the telescoping sections allows me to tune it up to 10 meters.

I expected this to work pretty well on 20 through 10 meters, but I have been pleasantly surprised at how well this works on 40 and 30 meters. When there has been a DXpedition somewhere in the , I have almost always been able to catch them on 40 and/or 30.

It’s not very effective on 80 meters, as you would expect. But I have worked eleven countries, including the , Wallis & Futuna, and on 80.

For the radials, I bought a 100 ft roll of light gauge flexible speaker wire from Radio Shack. I cut that into four 25 ft sections and soldered small clip leads to the ends. Leaving the ends connected to the four clips, I separated the two speaker conductors, which gave me eight radials. The limp, flexible wire is particularly easy to extend and retract without tangles. 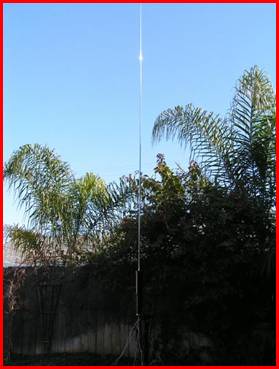 It’s certainly not a tower and beam, but it’s not a bad antenna at all. The High Sierra Sidekick motorized coil is mounted on a tripod, with eight 25 ft. radials on the ground. The whip is a 12 ft. telescoping unit sold by MFJ.

For my transceiver, I use an Icom IC-7000. That is a wonderful rig, with 100W output and an amazing amount of features contained in a very small package. In addition to that, I use a K-5 keyer and a Bencher paddle, a small Diamond SWR/Power meter, a conventional power supply, and a small dummy load.

I use four milk carton crates as the base for my portable station, with a spare wooden shelf spread across the top. We use the crates to pack our household stuff.

I tried to calculate how many dB difference there was between this setup and my tower, beam and amplifier at home. But I gave up. It’s a lot of dBs!

I expected to be most effective on CW, RTTY and PSK. That’s certainly true, but I have also had plenty of success on SSB.

With this simple setup, I have worked more than 100 countries in the three month time period we’re in , for each of the last three years. In total, I have worked all states on Mixed mode and RTTY/PSK, and I’ve worked 184 countries and 38 zones so far.

Compared to operating in , the pacific rim is much easier to work from , and is harder. Almost 20% of my QSOs are with from KØXB/6.

Compared to operating with a tower, beam and amplifier, you learn to pay much more attention to band openings of course. If the bands are poor, I do something else. But if the bands are hot, I can even break a pileup.

I am back in now, but give me a call if you hear KØXB/6 next winter.