One and One-half Milk Carton Crates

One and one-half milk carton crates. That’s all the space I need to pack my portable station and bring it with me on our drive to California every winter. Well, to be fair, I’m not counting the extra bag I need to carry the antenna, but that’s not very big. And, I leave that with our daughter who lives in the area anyway. “One and one-half milk carton crates and a bag” doesn’t sound good either.

Most Fridays when I’m in San Diego I join Tom WØNI and his crew at lunch. About one month ago, I was sitting next to Mitch K6BK, and he asked me if I was going to the DX Club meeting. He said people were wondering if I was real, since I am not there most of the time but my call is often mentioned when John K6AM talks about DX standings.

Yes, I am real, and I’m proud to be a member of the club. I’ll make a concerted effort to make it to the meetings from now on, when I’m here. In the meantime, I wanted to introduce myself and tell you about the portable setup I use when I’m in California.

My primary QTH is in northern Minnesota, and I spend winters in California. My wife and I moved from Minneapolis to our lake home on Lake Vermilion when I retired a little more than ten years ago. Lake Vermilion is a large lake in the Canadian Shield, which is a vast area of forests and lakes extending from northern Minnesota well into Canada. It’s a beautiful place, but we’re not crazy. The winters are severe. We don’t normally get a great deal of snow, but wintertime temperatures often go below zero. A few years ago, the thermometer hit -40F, and I took a picture. I took another picture when it hit -43F. That’s cold.

Before you ask, yes, life goes on when it gets really cold. But I grew up there and spent most of my working life in cold climates. If you haven’t experienced extreme cold weather, the best thing for you to do is to stay in southern California.

Anyway, back to ham radio.

I’ve been an avid DX-er since I was first licensed in 1961. We rent a small house on Coronado, so I can’t install anything permanent, and I certainly cannot put up a tower and beam or anything like that. So, my challenge was how to continue my DX-ing with these restrictions. In the rest of this article, I will tell you what I have done and how well it’s worked.

The real key to any ham station is of course the antenna. I have always felt a vertical was the best DX antenna, other than a tower and beam, so I use a vertical configuration. My antenna is based on a High Sierra Sidekick, which is a motorized mobile antenna. I mount the motorized coil on a lightweight tripod in the back yard, and I throw out eight 25 ft. radials on the ground. There is only room for four of the radials to be fully extended, but I figure something is better than nothing, so I use all eight. In place of the short whip which comes with the Sidekick, I use a 12 ft. telescoping whip sold by MFJ. The screw threads match perfectly, so it’s an easy modification.

With the whip fully extended, it is resonant at 20 meters. Adjusting the motorized coil with a rocker switch in the shack allows me to easily tune down to 80 meters. And shortening some of the telescoping sections allows me to tune it up to 10 meters.

I expected this to work pretty well on 20 through 10 meters, but I have been pleasantly surprised at how well this works on 40 and 30 meters. When there has been a DXpedition somewhere in the Pacific Rim, I have almost always been able to catch them on 40 and/or 30.

It’s not very effective on 80 meters, as you would expect. But I have worked fifteen countries so far, including the Austral Islands, Wallis & Futuna, and Ducie Island on 80.

For the radials, I bought a 100 ft roll of light gauge flexible speaker wire from Radio Shack. I cut that into four 25 ft sections and soldered small clip leads to the ends. Leaving the ends connected to the four clips, I separated the two speaker conductors, which gave me eight radials. The limp, flexible wire is particularly easy to extend and retract without tangles. 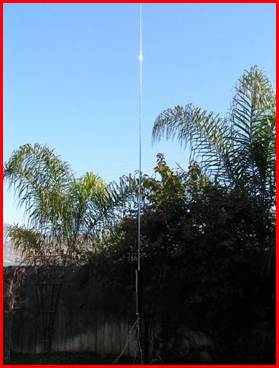 It’s certainly not a tower and beam, but it’s not a bad antenna at all. The High Sierra Sidekick motorized coil is mounted on a tripod, with eight 25 ft. radials on the ground. The whip is a 12 ft. telescoping unit sold by MFJ.

For my transceiver, I use an Icom IC-7000. It is a great rig, with 100W output and an amazing amount of features in a very small package. In addition to that, I use a K-5 keyer and a Bencher paddle, a small Diamond SWR/Power meter, a conventional power supply, a small dummy load and a laptop. 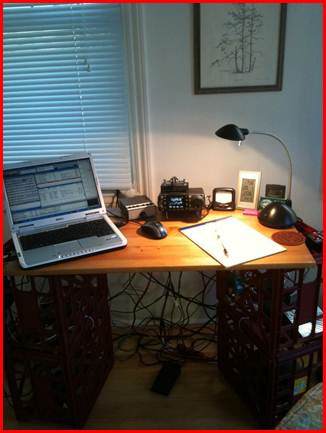 I use four milk carton crates as the base for my portable station, with a spare wooden shelf spread across the top. Along with my radio gear, we use the crates to pack our household stuff for the drive to California.

I tried to calculate how many dB difference there was between this setup and my tower, beam and amplifier at home. But I gave up. It’s a lot of dBs!

With this simple setup, I have worked more than 100 countries in the three months we’re in California, for each of the last four years. In total, I have worked all states on Mixed mode and RTTY/PSK, and I’ve worked 205 countries and 38 zones so far. My goal was to have fun, and that’s certainly been true.

Compared to operating with a tower, beam and amplifier, you learn to pay much more attention to band openings of course. If the bands are poor, I do something else. But if the bands are hot, I can even break a pileup.

I’ll be back in Minnesota in May. Give me a call when you hear KØXB.